A community committed to the religious beliefs and practices of Reform Judaism. We invite our members to celebrate their individuality, determining what Judaism means to them and how it should best be reflected in their lives and through their contributions

A community committed to strengthening our Jewish identity and advancing our Jewish beliefs through an abiding commitment to education and enrichment in Jewish lore and legacy, applying the principles of progress, pluralism and democracy to the core Jewish values of study, worship, and good deeds.

A community of active people who are working tirelessly to make a difference in our lives and in the lives of those around us.

A welcoming and giving community, always reaching out to help our Jewish and non-Jewish friends, neighbors and colleagues.

A community that treasures its diversity in all its forms – age, marital or partnership status, gender identity, sexual orientation, race and ethnicity – and practices every day its commitment to honor these differences as strengths that enrich our congregational life.

Become a part of our vibrant Jewish family…

We invite you to join us here http://supplement.reviews/ for Shabbat, a class, or an event that interests you to experience the warmth of our congregational family.

If you would like more information about becoming a temple member, please contact the Temple Office at (304) 342-5852.

The Union for Reform Judaism – of which Temple Israel is one of the founding member congregations – has lots of info about the Reform Movement: beliefs, practices, ethics, holidays and much more.

Congregation B’nai Israel (Temple Israel) was informally organized in 1856, some 7 years before the creation of the State of West Virginia. The Congregation’s cemetery was founded even earlier, in 1836, and is the oldest Jewish cemetery in West Virginia.

The Congregation was legally chartered in 1873 as the Hebrew Educational Society. The first services were held in rooms over a store on Capitol Street with 16 members present. The Union of American Hebrew Congregations (now the Union for Reform Judaism) was organized that same year in Cincinnati. Our Congregation was among the original member congregations of the UAHC. 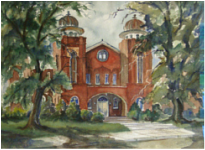 In 1875, the Congregation moved to a small Temple on Lee Street. The Virginia Street Temple was erected and dedicated in 1894. Dr. Isaac Mayer Wise, founder of UAHC, delivered the dedicatory sermon. Our place of worship for 66 years, the Virginia Street Temple was eventually replaced in 1960 with the completion of our current home on Kanawha Boulevard East at Chesapeake Avenue.

Many accomplished rabbis have served the Congregation. Among the prominent rabbis who have served as spiritual leaders of the Congregation were Dr. Israel Bettan (1911-1922), who later became the noted Professor of Homiletics at the Hebrew Union College, and Dr. Maurice Eisendrath (1926-1928), a significant influence in the development of Reform Judaism who became the president of the UAHC.